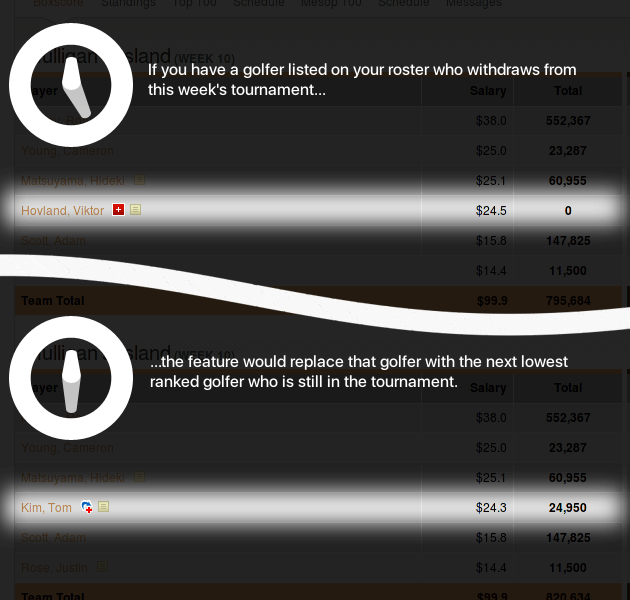 A: The new Injury/Bye Protection feature gives the user the ability to protect their lineup from starting a golfer who is on Bye or withdraws from a tournament after the trade deadline has passed. For example, if you subscribe to the protection feature, and have a golfer listed on your lineup who withdraws from the tournament*, the feature would use a prepaid trade to replace that golfer with the next lowest ranked golfer who is still active in the tournament and not already listed on your lineup.

How is the replacement golfer determined?

A: The replacement golfer is determined by using salary first, then the H2H player ID only if there is a tie with multiple golfers at the same salary. For example, if the golfer being replaced has a salary of $14.2, and there are three other golfers with a salary of $14.1, the system will pick the $14.1 golfer with the lowest H2H player ID. It will not replace golfers with higher salaries and will not allow a team to go over its salary cap.

Will this cover a golfer if they are the lowest salaried golfer?

A: No it will not. The system is set up to select the next golfer down in salary. If there is no golfer available at a lower salary, no auto-substitution will be executed.

Will this cover a golfer if they are disqualified or cut from a tournament?

A: Unfortunately no. The system only replaces golfers who are unable to play in the tournament, and is not designed to replace golfers who are playing poorly (cut) or break the rules (disqualified).

What happens if my replacement golfer also withdraws from a tournament?

A: If your replacement golfer has withdrawn from a tournament, and that golfer was originally replaced by this service earlier in the same tournament, your golfer will be substituted at no additional charge, as long as there is a golfer available at a lower salary.

A: Simply contact Customer Service and we would be happy to disable the Injured Player Protection service on your team for you. Just be sure to get your request in by Wednesday before play begins for the week.

* Golfers that are injured or withdraw after the start of the final round of a tournament will not be eligible for replacement.